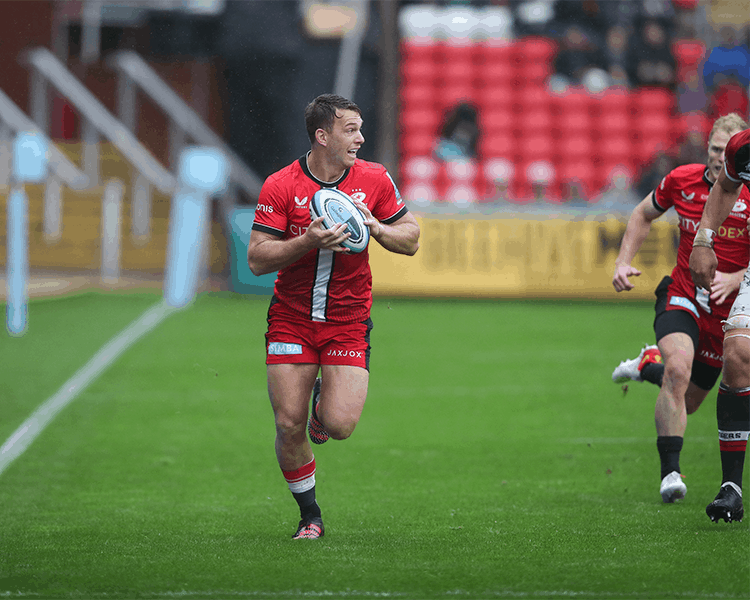 Winger Alex Lewington has spoken of the enormous excitement among the squad ahead of their Premiership homecoming on Saturday afternoon against Newcastle Falcons.

For the first time since the start of the COVID-19 pandemic StoneX Stadium will have a capacity crowd coming through the gates to see the Men in Black, who last hosted a Premiership match on 4th October 2020.

There are four changes to the starting XV from the side that narrowly lost to Leicester Tigers last weekend, with two up front and two to the back-line.

Mako Vunipola returns for the first time this season after a rest period following British and Irish Lions duty and he his alongside Jamie George and Marco Riccioni in a powerful front-row.

Callum Hunter-Hill comes in to the second-row to join Tim Swinson, with Nick Isiekwe moving to blindside flanker next to Ben Earl and Billy Vunipola in the back-row.

Aled Davies and captain Owen Farrell continue their half-back partnership, whilst Alex Lozowski moves to inside centre to accommodate Dom Morris in the 13 shirt.

Sean Maitland also pulls on the Sarries shirt for the first time this season after recovering from a knee injury picked up in the home friendly against Ulster to take his place on the left wing, with Lewington continuing on the right and Max Malins at full-back.

On the bench there is a wealth of experience with four full Internationals including Eroni Mawi, who was impressive at Welford Road, as well as Ivan van Zyl who could make his debut following a suspension.

Lewington is expecting a tough battle against Newcastle, but the over-riding feeling in the camp is anticipation to run out at StoneX once again.

“It’s going to be a really special occasion on Saturday. We are very much just focusing on our job on the field, but I can honestly say having fans back is an absolute game changer.

“As a playing group we are massively excited to get back out there and play in front of our supporters, and are ready to give back after all they have given us.”

The Falcons arrive in good form with two wins from their opening three matches, and Lewington is aware of the challenge ahead.

“Newcastle are a great team. They have some great young players coming through, and they seem a bit more experienced this season and they have really exciting players out wide who they want to get the ball to.

“Traditionally the Newcastle game has been a forwards battle but now they have more strings to their bow.”