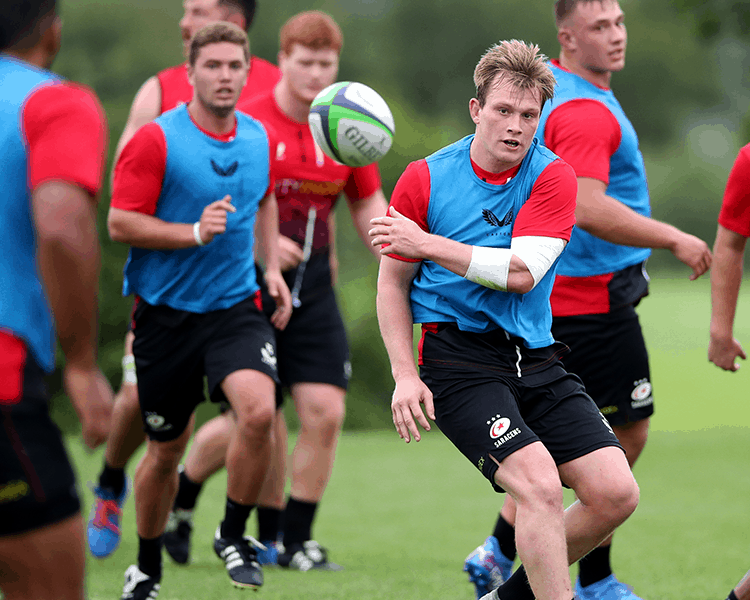 Nick Tompkins believes Thursday’s final pre-season friendly against Ulster is a brilliant opportunity for Saracens Men to keep growing as a group ahead of their return to the Gallagher Premiership.

Director of Rugby Mark McCall has named a large squad again that will look to entertain a lively crowd at the iconic Honourable Artillery Company in London.

The Men in Black take on Ulster for the second week in a row after an entertaining 45-21 victory at the Kingspan Stadium last week.

The 31-man squad, which is largely the same as the one that travelled to Belfast last Friday will once again be captained by Jackson Wray.

The group will be looking to gain further continuity, which is reflected in McCall’s selections as a formidable group of forwards have been chosen to hopefully give Sarries front-foot ball.

In the backs Alex Lozowski will be aiming to make his first start since returning to the club and the likes of Rotimi Segun and Ben Harris, who were both on the scoresheet last week, will be hoping to continue their strong form.

Academy players Harvey Beaton, Sam Crean, Sam Wainwright, Sam Bryan, Josh Hallett and Charlie Watson will also have their eyes on some game time at the HAC with Bryan set to make his first-team debut.

Tompkins, who scored in the win last week, has stressed the importance of Thursday’s match, whilst also outlining what makes playing at this unique venue so remarkable for the players.

“It’s our last chance for a hit out before the Bristol match so we’re looking to build on last week and keep growing. To play top opposition is great for us and we took real confidence from last week to come back with a positive result away from home.”

The Welsh International added: “HAC is always a really special evening to play right in the middle of London. The fans are right on top of you which gives it a very different vibe so we’re all very excited.”

The match is being streamed live with coverage starting from 16:30, here is the link to watch.