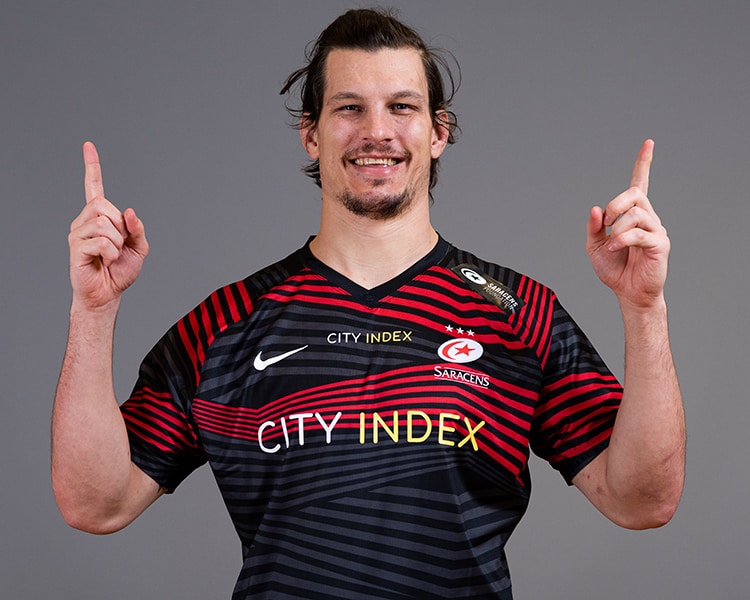 Mike Rhodes will join the Saracens 100 Club this weekend.

The South African has been named at blindside flanker for Saracens’ Trailfinders Challenge Cup match against Ealing Trailfinders at StoneX Stadium and will make it a century of appearances for the Men in Black.

Rhodes quickly became a fan favourite upon his arrival at the club in 2015, helping the club to two double triumphs and a further European Cup and Premiership title.

Rhodes will make his 100th Saracens appearance against Ealing.

He is joined in the back row by Academy graduate Sean Reffell and Namibia international Janco Venter – the latter appeared in the reverse fixture at Ealing in mid-January.

Richard Barrington and Vincent Koch both return from injury to start either side of captain Tom Woolstencroft while Joel Kpoku is named at lock alongside Callum Hunter-Hill following his suspension.

Nine-turned-ten Tom Whiteley is set to surpass 50 outings for Sarries on Saturday after five years in north London and has fellow scrum-half Aled Davies inside him.

Former Trailfinder Harry Sloan takes on his ex-club from inside centre and will have Dom Morris outside him, and Elliott Obatoyinbo, Ben Harris and Rotimi Segun link up in an energetic back three.

Academy back rower Toby Knight could make his competitive senior debut from the bench.

Saracens team to take on Ealing Trailfinders at StoneX Stadium at 1pm on Saturday:

Don’t forget you can live stream the game for free! Coverage begins at 12:30pm with kick off at 1pm.