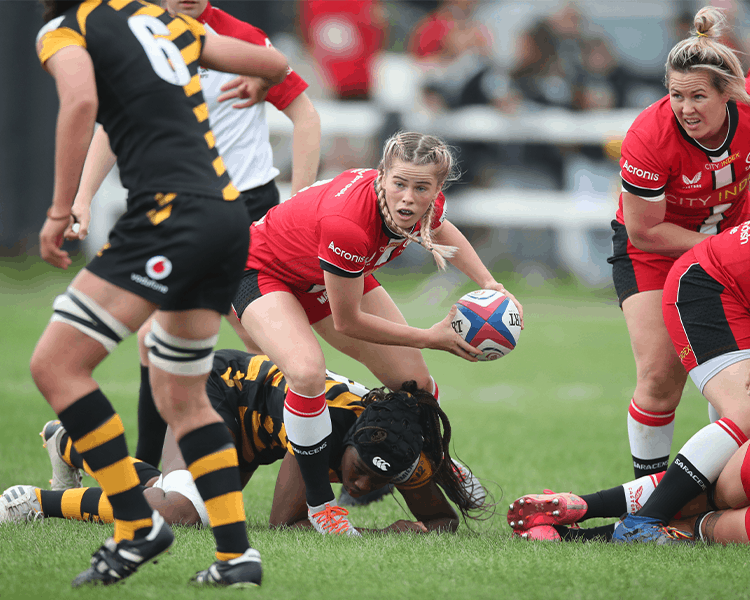 Poppy Cleall is bursting with pride as she prepares to make her 100th appearance for the club against Loughborough Lightning this Saturday.

The back-rower who is regarded as a crucial player for both Saracens and England will be leading the team out at StoneX Stadium to celebrate the milestone in front of the supporters in attendance.

There are three changes to the starting line-up from the side that defeated DMP Durham Sharks impressively in Darlington last week, as the Women in Black get ready for their first home match of the new season.

Two of those changes come in the front-row as May Campbell and Donna Rose return to start alongside Rocky Clark to take on last year’s semi-finalists. Sonia Green and Georgia Evans continue in the second-row, with a dynamic back-row of Vicky Fleetwood, Marlie Packer and Poppy Cleall who all scored in the win against the Sharks.

Ella Wyrwas faces her old side at scrum-half and is once again partnered by Zoe Harrison at fly-half, with the pair making a highly impressive start to the campaign.

Holly Aitchison, who showed her distribution skills with some wide passes to set up a number of tries last week is at 12, with Hannah Casey next to her in the midfield.

Captain Lotte Clapp, try-scorer in both matches so far is on the left wing as Rachel Laqeretabua comes in on the right and Sarah McKenna remains at full-back.

On the bench Jodie Rettie returns, and Sophie Shams is in the match day squad for the first time since her summer move to North London.

Cleall says Saturday will be one of the highlights of her career so far.

“I have a lot of great memories across the years at Sarries and one of them will be making my 100th appearance at such a great club.

“To be able to play in the best league in the world fills me with great pride and I hope we can go out and get the win to keep up our good start to the season.

“I’d like to thank all of the fans for their support throughout my whole period here, I love representing the Saracens badge.”