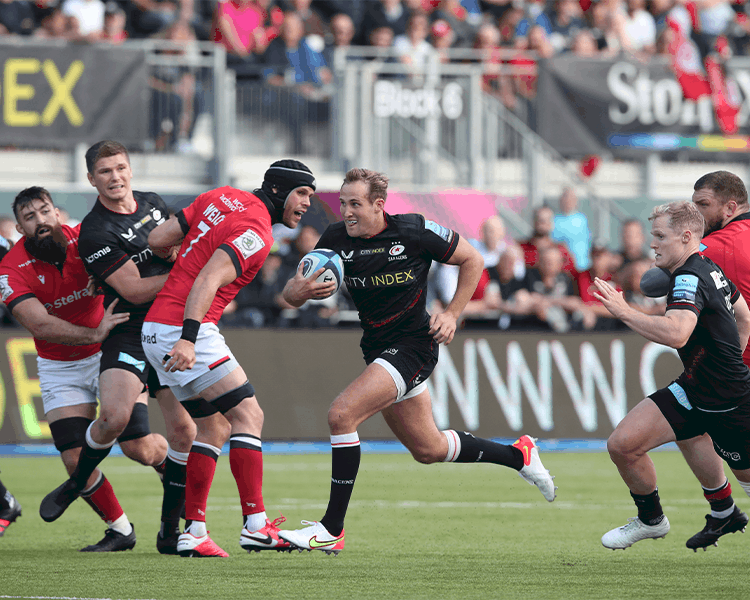 It had been so long, Max Malins couldn’t actually remember the last time he ran out at the StoneX Stadium to play for Saracens.

I think it was against Bristol in December, 2019,” he said after slight pause. Bristol! It had to be, didn’t it . . . four days before Christmas and he scored two tries.

The Bears were the club that took him in during COVID and helped him to further develop his game. But that was then, and this is now, and he can’t wait to show the Sarries fans what tricks he picked up playing alongside the likes of Charles Piutau and Semi Radradra.

“I’m used to playing alongside world class players at Saracens, but it was great getting the chance to team up with two real global superstars like Charles and Semi. I learned a lot from studying them, as well as training and playing with them, and I hope I have returned a better player,” said the England full back.

“Both Ben Earl and I were fortunate to be allowed by Saracens to continue playing in the Premiership during the club’s season in the Championship. We were fortunate to join Bristol at a great time and I’ve returned with a European Challenge Cup winners’ medal and having played in a Premiership semi-final.”

The decision taken by the club to loan out two of their most promising young assets at such a difficult time showed a number of things, according to Malins. That the club were willing to invest in the development of both himself and Earl and that they cared about what was going to be best for the them.

“Looking back, it was a really mature decision. They gave me a contract extension and then allowed me to go and play in the Premiership while the rest of the club was concentrating on getting back there after a season in the Championship,” said Malins.

“I don’t think I could have asked for a bigger or better opportunity and I am extremely grateful to both clubs for what they did for me. The switch was made much easier because Ben joined me at Bristol and we lived together in a flat in Clifton.

“Whenever one of us was invited anywhere, we both turned up. We were a small Wolfpack embedded in a group (it should be sleuth) of Bears.”

Pat Lam often wondered if his two imports were joined at the hip, but since returning to their natural habitat in North London they have seen a little less of each other.

“We’re no long living together now that we are back at Sarries and as the backs and forwards work separately in the mornings at training we tend not to be together until the second half of each day,” added Malins.

“Ben got the chance to go back and play against Bristol in our first game back in the Premiership. I had to watch from the sidelines, but it was great seeing him whooping every time we got a decision and really winding up his former team mates.

“When we did all come back together for pre-season at Sarries it was just as though we hadn’t been apart. There weren’t many new faces on the coaching or playing side and we all slotted seamlessly back into what we were used to doing.

“We always were a very tight-knit group and we all have the same pride in playing for Saracens. That hasn’t changed.”

Having missed the win over Bristol at Ashton Gate, Malins was back in the side for the single point defeat at Leicester. That was a game won by the Tigers with a contentious penalty try in added time at the end of a ferociously contested game.

“It wasn’t nice losing, and my shoulder is still a bit sore after colliding with a post, but two things really struck me at the end,” pointed out Malins.

“Firstly, when the penalty try was given, the Leicester players and fans simply erupted in joy. It revealed to us just how much it still means to the teams in the Premiership to beat Saracens.

“Then, secondly, the noise at the end also showed us all just how lucky we are to be back playing in front of fans. It was difficult without them and I know I speak for all the players in saying how much we are all looking forward to playing in front of our fans this weekend at the StoneX.”

The 24-year-old Malins returns to home ground as one of the new faces of Eddie Jones’ England team having won eight caps during his time away. More seem likely to follow, although Malins knows that is conditional on him playing at his best week in, week out for Saracens.