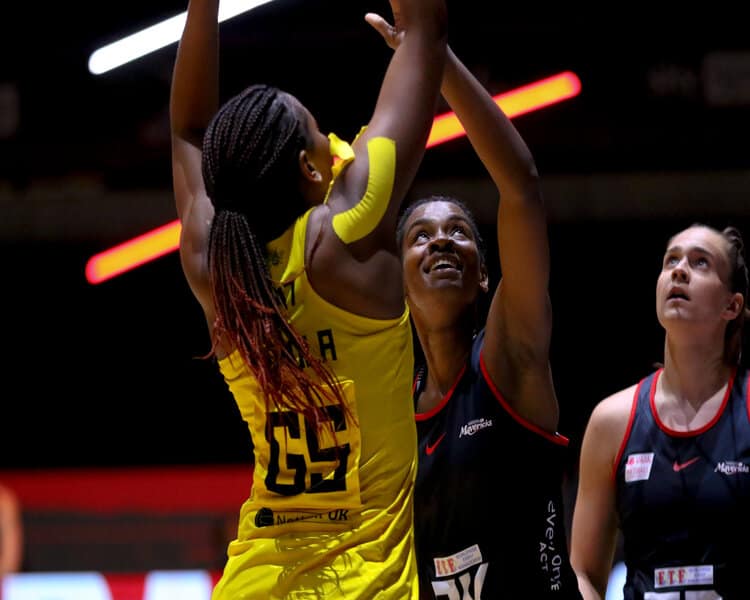 Thunder prove too tough for Mavericks

Sunday night’s action drew to a close in a match between Saracens Mavericks and Manchester Thunder. A much-anticipated game, which will be all important in deciding the top four this season, ultimately saw Thunder take the win.

The first quarter started quite evenly matched, with Thunder taking a small lead early on. A defensive unit of Jodie Gibson and Steph Collard was out in full force, working hard to slow down the Manchester Thunder attack and turning over possession. Although this is not a pairing we usually see on court, they were effective. However, Thunder began to apply more pressure towards the last few minutes and took the first quarter 17-9.

In the second quarter, Manchester Thunder continued as they had in the first quarter, punishing every error Mavericks made. However, Mavericks continued to work hard to convert as many opportunities to goal as they could. Some substitutions were made to Kat Ratnapala’s side as they fought to disrupt Thunder’s momentum. The half time score was 48-31.

The third quarter continued as the first two, with Thunder pushing ahead even further. Saracens Mavericks had some great interceptions from Gabby Marshall and Jodie Gibson, as they continued to strengthen the defensive end. With such an important game at risk, they put their bodies on the line to turnover as many balls as possible. Thunder took the quarter to further extend their lead, ending it at 48-31.

Mavericks really began to work together in the final quarter. They took the quarter goal for goal, as Kadeen Corbin moved into GK, instead of her usual shooter positions. This worked effectively as Mavericks began to capitalise on every opportunity. However, this seemed to be too little too late, as Thunder ultimately took the win with an 18-point lead. The final score was 60-42.

Although not the desired result, one could not help but notice Mavericks’ impressive defensive unit, with Jodie Gibson picking up the Player of the Match award. It is hard to believe that she is still coming back from injury, as she delivered yet another standout performance.