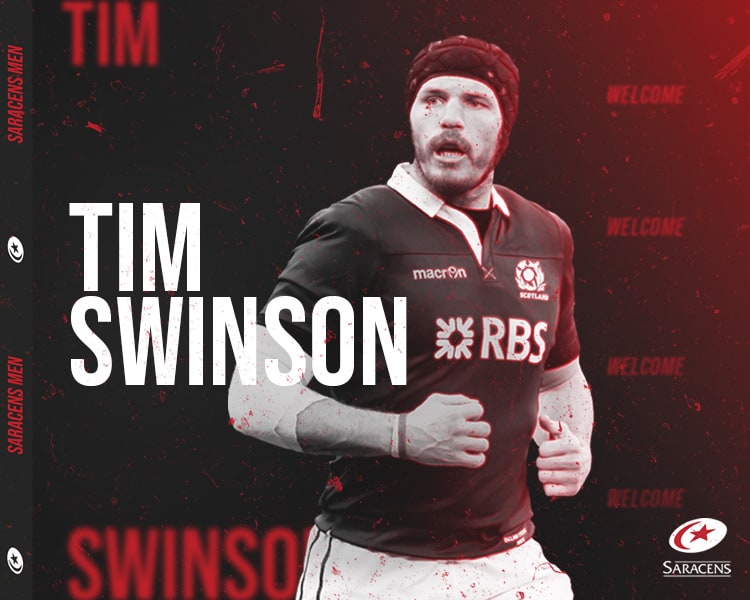 Saracens is pleased to announce the signing of experienced second row Tim Swinson.

The 33-year-old has been tempted out of retirement to extend an already impressive 14-year career with a stint in north London.

Swinson initially called time on his playing days back in May having won 38 caps for Scotland and made 136 appearances for Glasgow Warriors, where he won a Pro12 title in 2015.

“The thing that really drew me to the club was the coaches.”

But when the chance to play for his boyhood club arose – Swinson played at Bramley Road as a junior – he jumped at the chance to team up with some familiar faces once again.

The lock began his career with Newcastle Falcons where he was initially coached by Ian Peel, the current Saracens forwards coach.

And he insists the chance to play under this coaching group was one of many factors that made the club’s offer too good to turn down.

“Saracens for me is my childhood club, I played my first game of rugby as a curtain raiser for them,” said Swinson.

“The thing that really drew me to the club was the coaches, particularly the forwards coach (Ian Peel). He was my academy coach when I was at Newcastle. He was always a guy that I wanted to play in a team who he coached and that became the opportunity now.

“When I retired I was really happy to retire and then this opportunity came up and it really ticked a lot of boxes; playing for my childhood club, playing for coaches that I have always had respect for, playing for a club that has won a lot recently and experiencing that culture which everyone talks about as being a big part of the Saracens ethos.

Director of Rugby Mark McCall said: “Tim is an incredibly experienced player who we believe can have a really positive influence on some of our young locks.

“He is a great competitor as evidenced by the hugely successful career he has enjoyed and we are delighted that he has chosen to extend that career with us.”