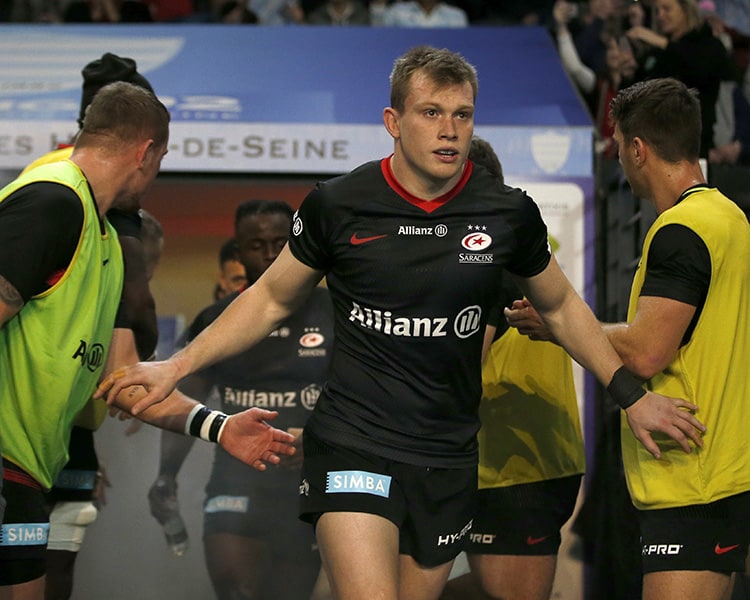 Nick Tompkins is in line for his international debut on the weekend of the 2020 Six Nations Championship.

The Saracens centre has been named on the bench for Wales for whom he qualifies via his Grandmother Enid who was born in Wrexham in 1933.

He said: “Nick has trained really well and has impressed, and we are looking forward to seeing him at some stage during the game.”

Tompkins, who has won the U20 World Rugby Championship with England, has been named at 23 for Wales this weekend.

Tompkins’ form since the start of last season has led him earning international recognition.

The Sidcup-born 24-year-old tops the Gallagher Premiership charts for tries scored, metres made and defenders beaten for players in his position and will hope to take his game on again in a Wales shirt.

Ahead of his call-up, Tompkins said: “It is a huge honour to have been asked to join the Welsh squad.

“My grandmother was born in Wrexham, and I have cousins who are regulars at the Principality stadium in Cardiff.

“It’s true that I played for England through the age-groups, but I have always felt part Welsh and part English, and I am massively excited by the prospect of wearing the red jersey and playing for the most passionate supporters in world rugby.”

Elsewhere in the tournament, Sean Maitland will earn his 45thcap when Scotland take on Ireland at the Aviva Stadium.

The 31-year-old has been named on the wing for Gregor Townsend’s side who will be looking to bounce back from being knocked out at the pool stage in the 2019 Rugby World Cup.

Maitland featured twice for the Scots in Japan and has 13 international tries to his name.