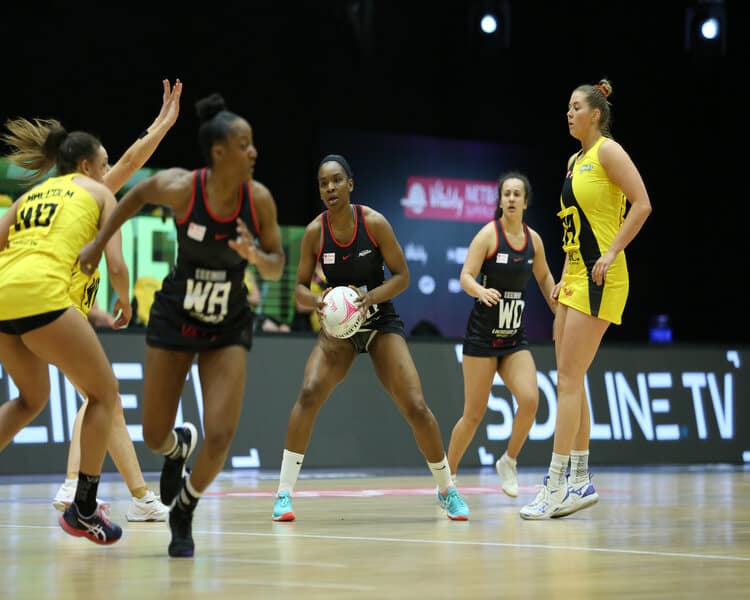 Saracens Mavericks faced tough opposition in Manchester Thunder, as both sides fought it out for a spot in the top four.

Both teams were coming out of a huge win against the top two sides yesterday and were raring to go in the last match of the double header weekend.

Thunder came off the blocks flying, converting Mavericks’ centre pass and subsequently their own. It soon became a game of catch up for Mavericks, who were not seeing the same level of confidence as they had in yesterday’s match. Thunder were clinical and converted to goal at every possible opportunity. The first quarter ended with Thunder winning 9-15.

In the second quarter, Mavericks head coach Kat Ratnapala made some changes to their shooting circle, substituting Ine-Mari Venter for Britney Clarke. Clarke had an exceptional game tonight, and saw a high rate of successful goals. This wasn’t enough to stop Thunder, who had begun to gain momentum, going into the break leading 20-30.

Throughout the third quarter, both sides managed to keep goal for goal. In this close quarter, Mavericks began to gain confidence, playing with the flair they had shown in their previous match against Team Bath. This could not stop Thunder’s momentum however, and they entered the final quarter with a score of 29-40 to the northern side.

The final quarter is where Thunder really managed to pull ahead. They were unforgiving in their pursuit of the ball and punished every single Mavericks error. Their turnover rate gave Mavericks little chance to get the ball to goal. Manchester Thunder won the match 37-59.