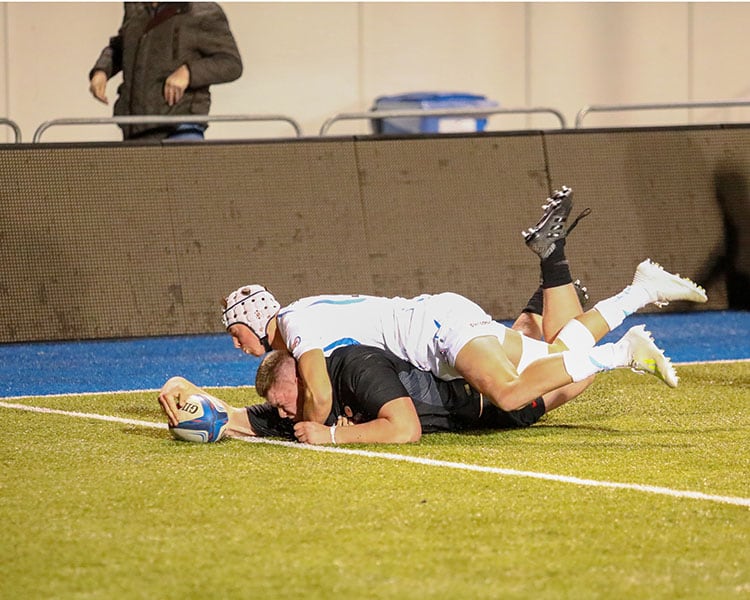 The youngsters in Black ran out 31-19 winners in north Londond and started the game well, dominating territory and possession in the early stages.

Alex Cahill kicked expertly and found space which enabled Sarries to set their mark deep into Exeter’s half and a try soon followed. Zack Hill opened the scoring with a well worked try following a good break and skillful offload from Toby Knight.

Jackson doubled his tally following a catch and drive from a line-out. The centre worked his way in-field, crashed on to a short Sam Byran pass and used impressive footwork to beat three defenders and dot down.

Chiefs replied either side of the interval both through good forward play but Wilson Ijeh stretched Saracens’ lead with an individual effort on the left wing.

Sarries rounded off their scoring when Samson Adejimi carried well from five metres out and was helped over the whitewash by Tom Mills.

Exeter grabbed a late consolation but an efficient Saracens performance saw the Under-18s kick-start their campaign in fine fettle.

“It was a good start to the U18 league season,” Academy Manager Mike Hynard said.

“I was really pleased for James Tirrell, Kelly Brown and the performance staff who have worked so hard to prepare this group of boys as well as possible.  The half-backs helped control the game in the first half with their kicking game which enabled us to dominate the territorial battle.

“The forwards worked hard and set a good platform for the backs to play from. Toby Knight and Samson Adejimi were prominent with their work rate and physicality.

“Brandon Jackson scored a couple of good tries and it was great to see Wilson in full flight on the left wing. There are some fix ups that we will work on this week to ensure we continually improve from week to week.”