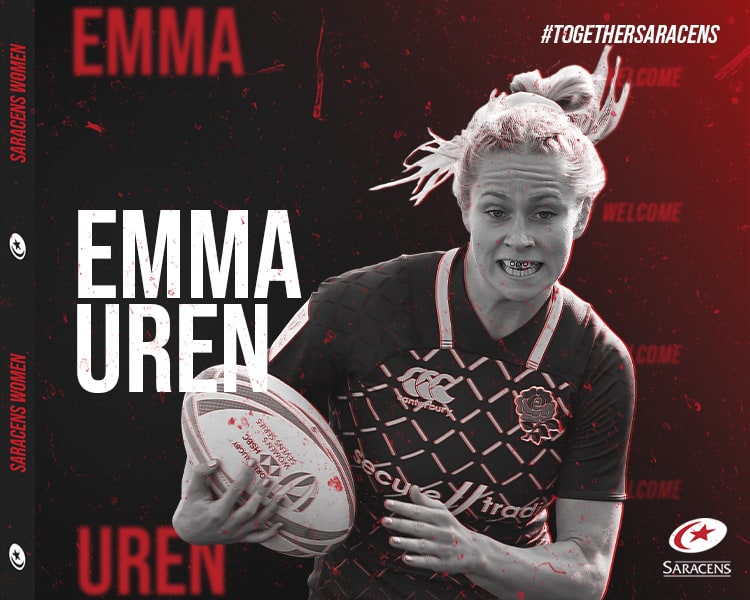 Saracens Women is delighted to announce the return of Emma Uren to the club.

The 22-year-old last featured for Sarries in the inaugural Premier 15s campaign which the Women in Black won before linking up with England Sevens.

She first picked up a rugby ball to play tag for Richmond Borough, winning the London Youth Games aged 11. At Orleans Park school, she then played rugby league before taking up union at 16 for Grasshoppers.

At this time, she switched her full attention to rugby, having been a competitive swimmer.

“I believe this is the perfect environment to push and challenge me as a player.”

During her time in Sevens, Uren has played 41 matches on the World Series, scoring 16 tries, and returns to Sarries to play under head coach Alex Austerberry who she recognises as a major influence on her career from his time as RFU Women’s Performance Pathway Officer.

“I am excited to be returning to Sarries and being part of such a talented group of players coupled with an outstanding coaching set up,” Uren said.

“I believe this is the perfect environment to push and challenge me as a player for this next step in my rugby career and I can’t wait for the start of the season.”

Austerberry said: “Emma returning to club is evidence of how highly we regard her as a player and person and how highly she regards the club.

“From a youngster arriving at the club, she developed into a player capable of thriving on the international stage and this has been evident in her performances for England Sevens. To have her return back to her Saracens family is truly exciting for this season and many seasons to come.

“A very talented player with an incredible work rate, professionalism, athletic prowess and desire to improve, I have no doubt Emma will make a significant contribution on and off the field.”