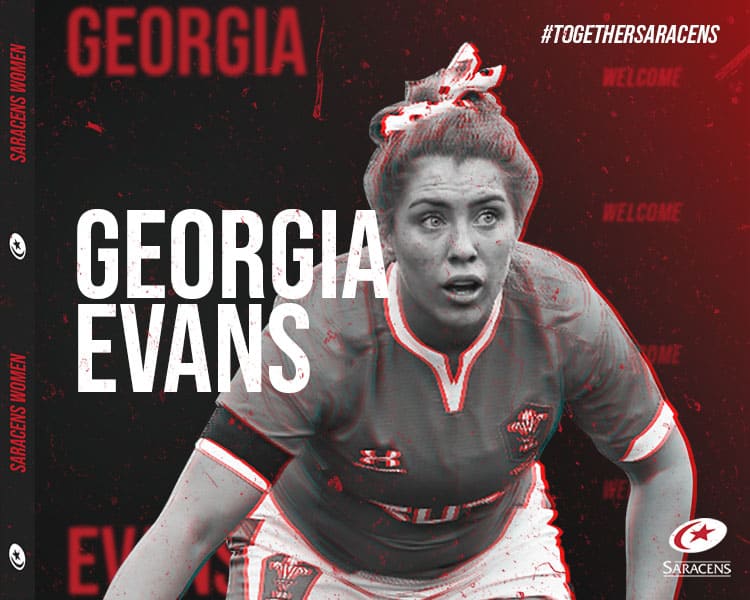 Saracens Women is delighted to announce Georgia Evans has joined the club.

The Wales international will link up with Alex Austerberry’s side for the 2020/21 Premier 15s campaign after previously playing for Pontyclun Falcons.

The 23-year-old is the cousin of former Wales men’s fly-half Ceri Sweeney and has appeared four times for her country in the past year.

“The opportunity to be a part of the Saracens family is something very special.”

Evans will add versatility across the back row and second row, and is excited by the prospect of being around a squad full of quality.

“The opportunity to be a part of the Saracens family is something very special and one that I’m more than excited to be involved in,” she said.

“This will be my first time in the English Premier 15s and looking to build towards a World Cup, I really wanted to challenge myself in an elite environment.

“Saracens is notably one of the top teams and being able to push myself with and against some of the top athletes in the game right now is something that really drives me forward.

“The support from all coaching staff and players has been amazing and really helped me settle in. I feel privileged for the opportunity and support and cannot wait to see what the season holds.”

Head coach Austerberry added: “Georgia is a Welsh international who has made the move to Saracens to test herself and challenge herself to be better.

“Physical, powerful and versatile with the ability to play across the back row and second row, the addition of Georgia offers more big ball carrying and defensive impact as well as someone who operates effectively in the breakdown.

“Her performances in a Welsh shirt illustrated the qualities she has as a player and as we have moved through pre-season we have not been disappointed and the potential she has to improve even further is undoubted.”