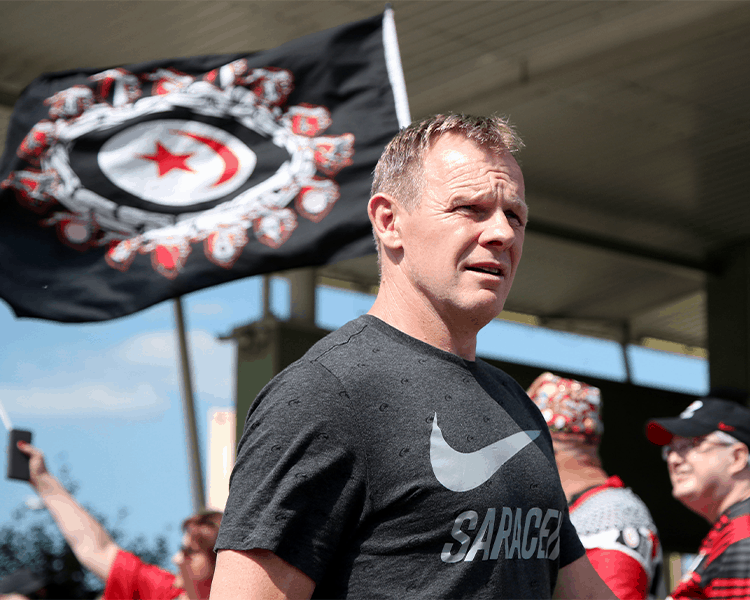 Mark McCall was in understandably jubilant mood after the huge victory over Ealing Trailfinders in the first leg of the Championship Play-Off Final.

The Director of Rugby saw his side rampage their way to a 60-0 win, and was full of praise for his players after the final whistle.

“That was a great performance. We were right at it from the beginning putting them under pressure, and eventually that tells in games like that.” Said McCall.

He continued: “The most pleasing thing was how we kept at it all the way through and it felt like everything mattered. It was so hard out there in the heat but we had the energy and desire not to concede and then score a few more tries. It was a crucially important game and we’re delighted with the result.”

There were standout performances all over the pitch, but the DOR found it difficult to single anyone out aside from his Captain after such an impressive team display.

“Everyone was right at it and we all live for these important matches. I must say Owen was amazing, his game control was exceptional as well as his leadership, he really led from the front.”

McCall was still keen to stress his admiration for the Trailfinders, who have spent the majority of the season at the top of the table.

“Ealing are on the right trajectory for sure. They have a great Director of Rugby who is building a strong squad and we’ve played them four times this year with one more to come so both teams know each other well.”

When asked about selection for next week, McCall was adamant that Sarries want to finish the season as strongly as possible.

“We’ll make those decisions early this week, but this time don’t like to do things half-hearted. We want to bring that attitude again as we have waited for this opportunity to achieve our goal and we are very close now.”

He added: “We’ve waited 18 months for this and want to sign off the year well. There are some players leaving so we will want to send them off with a win which is what they deserve.”

The second leg at StoneX Stadium is live on BT Sport, with kick off at 15:30 on Sunday.