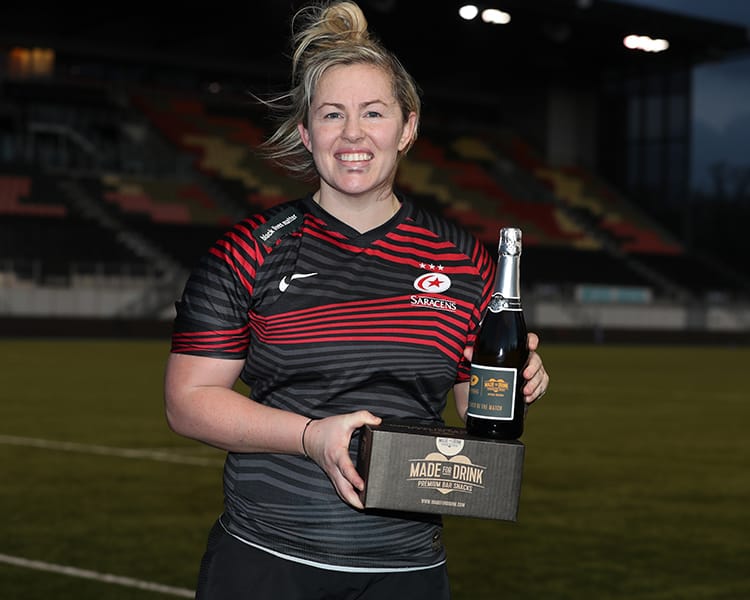 We need to turn up and put in a performance – Packer

Saracens retained their unbeaten status in the Allianz Premier 15s before Christmas by beating Loughborough Lightning 29-24 at the Copthall Stadium.

It was Saracens’ seventh consecutive bonus point victory and sets up a tantalising clash with top of the table Harlequins on 2nd January.

Tries from Lotte Clapp, Zoe Harrison, May Campbell, Sophie de Goede and Made For Drink Player of the Match Marlie Packer meant that Saracens went unbeaten throughout 2020.

Packer had a stellar match, winning several key turnovers as well as scoring the try that turned the game around just before half-time to reduce the Loughborough lead to just seven points.

“That game on the second of January is one of the biggest games of the season for both Harlequins and Saracens.”

The England flanker said: “It was just fantastic to be playing again really, all the hard work that everyone has put in and the backroom staff to get these games on is just phenomenal.

“For us to go out there and win it how we did, to come back after the first half performance, not saying it was bad by us, but it was tough to dig it out.

“I’ve got to give it to Loughborough, they’re a phenomenal team and they’ve got the world’s best player in Emily Scarratt. For us, it was just making sure we played our game, so it was really great to get the win the way we did.”

The win leaves Saracens second in the Allianz Premier 15s behind Harlequins but with a game in hand, making the clash against Quins in January an even more enticing affair.

“That game on the second of January is one of the biggest games of the season for both Harlequins and Saracens,” Packer said.

“We need to unwind and enjoy our time with our families but actually that will be in the back of our mind knowing that we have Harlequins on the 2nd and we need to turn up and make sure we put in a performance.”