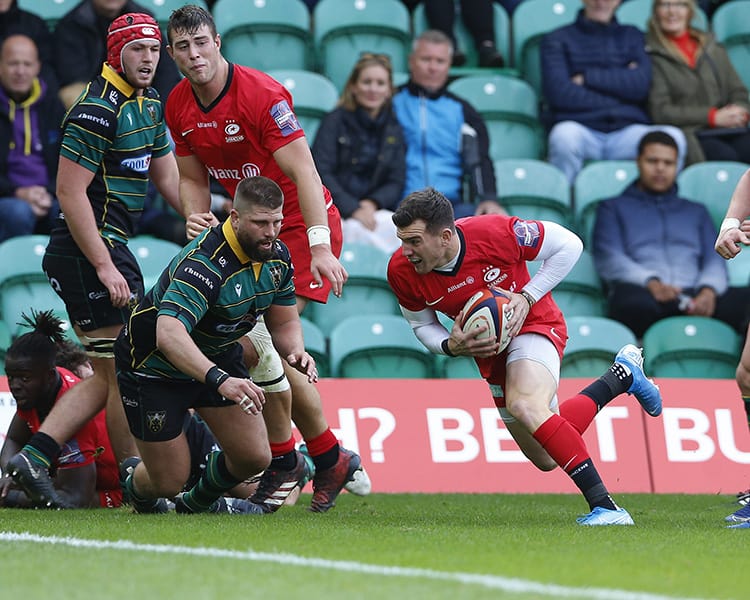 We were right on it in the second half – Spencer

Ben Spencer made a welcome return to the Saracens match day squad and made an immediate impact as the Men in Black ran out 54-28 winners against Northampton Saints in the Premiership Rugby Cup.

The scrum-half burrowed over for Sarries’ fourth try of the afternoon at Allianz Park minutes after coming on as a replacement.

“There’s always a rivalry when we play Quins so I’m looking forward to them coming to Allianz Park.”

Prior to his introduction, the visitors added to their slender half-time advantage via Tom Whiteley’s boot which Spencer feels ‘set the tone’ for the remainder of the match.

“It’s a great win,” he said. “The boys are buzzing with it especially after last week (against Sale Sharks).

“To come to Franklin’s Gardens against a good Saints side and to score 50 points, the boys are thrilled. It’s never an easy place to come.

“We spoke at half-time about our discipline which was something that let us down last week and I thought from the first whistle in the second half we were right on it.

“We got the ball straight back from the kick-off, managed to knock over three points and that set the tone for the second half.”

Spencer featured for the first time in 2019/20 and was pleased with the performances of the club’s young players.

Next up, Saracens take on Harlequins in the final round of the Premiership Rugby Cup before the Gallagher Premiership returns and Spencer is relishing taking on the Twickenham outfit at home.

“It was a long pre-season and it’s a pleasure to play with some of these young boys coming through.

“We’ll have a good week and look forward to Harlequins. There’s always a rivalry when we play Quins so I’m looking forward to them coming to Allianz Park and hopefully we’ll put in another good performance.”