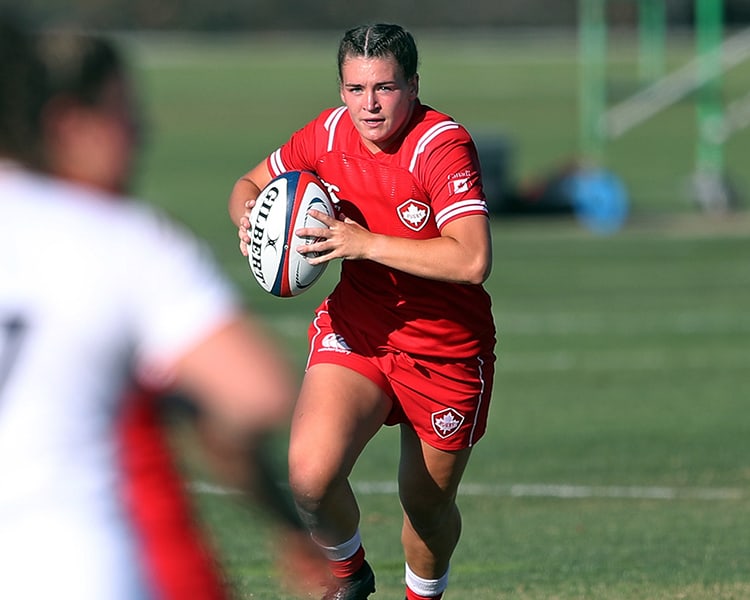 We’ve got to revert to the Saracens way – Corrigan

New Saracens Women signing Alysha Corrigan said that continuing to play the ‘Sarries way’ will be the key to staying at the top of the Allianz Premier 15s table.

The Canadian centre featured as a replacement in Sarries’ 73-3 win over DMP Durham Sharks on Saturday and joined Vicky Fleetwood, Poppy Cleall (3), May Campbell, Kelsey Clifford and Deborah Fleming on the scoresheet.

A new addition to the Women in Black in January, she was quick to impress off the bench, going over in the corner for a debut try in the closing minutes.

After showing how dangerous she can be from the midfield in Durham, Corrigan stressed that cementing the team’s on-field identity will be crucial for the rest of the season.

“We’ve got to go back to the Sarries way, and just keep on pushing forward and build off each game.”

“I think definitely moving forward we’ve just got to stick to our game,” she said.

“We’ve got to go back to the Sarries way, and just keep on pushing forward and build off each game.

“Each practice we have to focus on us, our game and doing the things we’re good at.”

Corrigan made her first appearance alongside another new arrival in second row Emma Taylor, and the two complete a quartet of Canadians at the club alongside Sophie de Goede and Mackenzie Carson.

All four will look to make an impact in the second half of the season and Corrigan has her sights set on the head-to-heads with Gloucester-Hartpury, Wasps and Bristol Bears in the coming weeks.

She added: “We have a bunch of big matches coming up. We really want to focus on ourselves and clean up the mistakes we made against Exeter.

“The girls have been really helpful. Everybody is so talented and the skill level is so high.

“It’s awesome to be playing and practicing with these girls. I can’t wait for the rest of the season with them.”