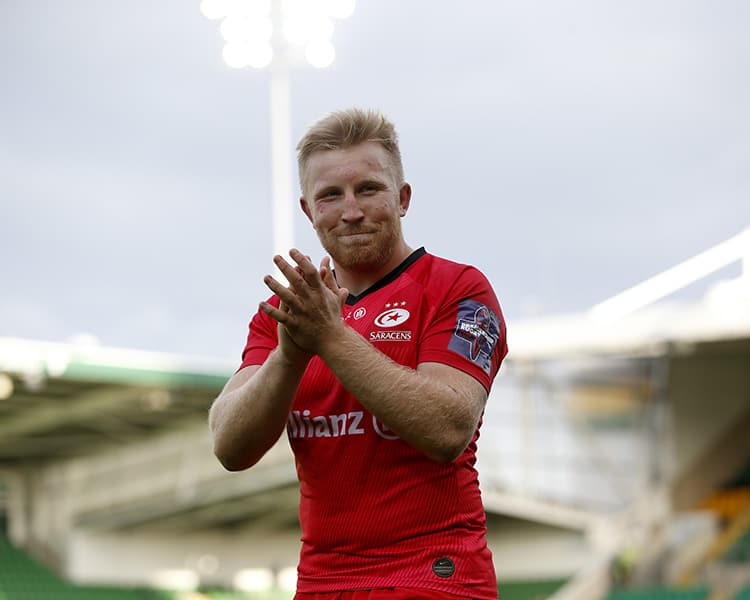 Jackson Wray will make his 50th Heineken Champions Cup appearance this weekend when Saracens take on Racing 92 – more than half of the club’s matches in the competition.

The Academy graduate made his debut in the tournament back in 2012 against Biarritz, going on to make two further appearances that season.

In 2012/13, Wray helped Sarries reach the semi-finals and a season later he crossed for his first European try on the club’s way to their first Champions Cup final.

The 29-year-old tasted his first success in Europe in 2015/16, playing in all nine matches as the Men in Black made history with their maiden European trophy.

Wray has played in 49 of Saracens 98 games in the competition.

On cap 36, Wray was part of the Saracens squad which retained their title and a third gong followed in 2018/19 with the Sunderland-born back rower completing 80 minutes in a comeback win over Leinster at St James’ Park, Newcastle.

There is no doubt Wray has been vital for the Wolfpack in the Champions Cup. Everyone at Saracens would like to congratulate Jacko on his achievement!

“I actually didn’t know it was this weekend!” Wray said.

“I’m very proud to have reached 50 games in Europe; it’s a great number to hit in the best competition in the world.

“We’ve had some ups and downs throughout that whole period and fortunately some of the more recent highs have been fantastic.