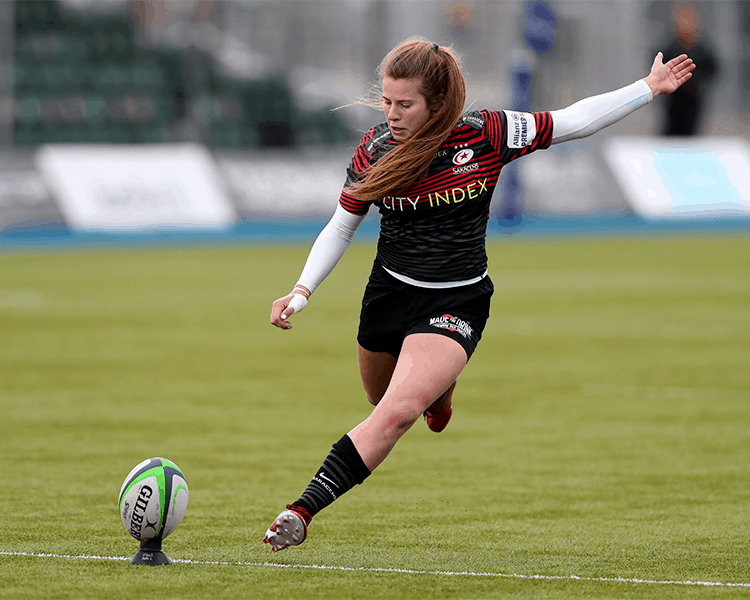 Saracens is pleased to confirm that Zoe Harrison has signed a new deal with the club.

The fly-half is a major part of the group, and her performances in recent years mean that she is now a regular for both the Women in Black as well as the Red Roses.

She made her England debut in 2017 against Canada, and now has 30 caps to her name. In 2019 she was awarded a full-time England contract, and celebrated it with a Grand Slam in the Six Nations.

The 23-year-old had her breakthrough season with Sarries in 2016/17, and was named Players’ Player of the Year. Since then she has made 67 appearances for the club in the number 10 shirts, and started both the 2018 and 2019 Premier 15s Finals.

Her performance in the 2019 Final saw her cross the try-line twice and score 18 points as she lit up Franklin’s Gardens with a fine display.

Harrison is excited to get going again as the squad look for another successful year.

“I’m very happy to be staying at Saracens, hopefully this season we can put things right after the end of last season.

We have some new faces to the team this season, not only players but coaches which will only help us drive forward. I’m really looking forward to seeing what we can do as a team this year.”

“Zoe is another local girl and has proven herself to be one of the most talented number 10’s in the country.

“It has been great to see her continue to grow and develop, and her ability to manage games will stand us in good stead.”